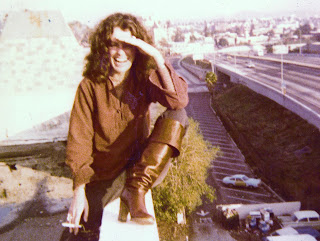 I liked Cathy from the first time I met her in 1965 she was Paul
Donnelly's girlfriend. We were social friends always glad to see each other.
From Wikipedia, the free encyclopedia
Cathy Evelyn Smith (born 1948 in Hamilton, Ontario[1]) is a former backup singer and rock star girlfriend, groupie and drug dealer, who served time in the California state prison system for the manslaughter of John Belushi in 1982.
Smith had been paid for a front page headline story in the Hollywood tabloid the National Enquirer,[2] where she stated she was the person who injected the actor with a fatal drug overdose. In 1984, Smith co-authored a book entitled Chasing the Dragon[3] which told her life story. The title is an allusion to Smith's heroin addiction. Smith appeared prominently in the Bob Woodward book Wired: The Short Life and Fast Times of John Belushi, and was played by Patti D'Arbanville in the film version. She has been called a backup singer but has also been described as merely a groupie.

Smith became notorious in the Belushi case, but her association with well-known performers goes back at least 20 years prior to her confession in the National Enquirer. Her earliest association was with Levon Helm, later a member of The Bandin 1963.[4] In Helm's autobiography, he recalls that Smith first met him in Hamilton, Ontario.[5] Helm, with friend and bandmate Rick Danko, was in a band called The Hawks at the time (see Ronnie Hawkins). At one point, the musicians were in Toronto facing a drug bust.[2]
Smith has been connected to The Band's famous song, "The Weight", released in 1968. Smith says in Rock and Roll Toronto: From Alanis to Zeppelin,[6] that Richard Manuel offered to marry her but she refused.[7] Nevertheless, she continued to tour and party with Helm, Rick Danko and Manuel through the 1960s. She later had an affair with Gordon Lightfoot. After the affair ended, Smith returned to Levon Helm and the circle who now comprised The Band.

Smith became an employee and then mistress of Canadian singer-songwriter Gordon Lightfoot in the early to mid-1970s. At one point, she even drove their tour bus. Smith sang backup on Lightfoot's song "High and Dry" which was on the Sundownalbum.[8] She apparently sang more backup on the album but Lightfoot mixed most of it out.[9]
By several accounts,[who?] the Smith-Lightfoot affair was volatile and illustrated in the lyrics of "Sundown", Lightfoot's Number One hit and most financially lucrative song. It reflects the dark feelings Lightfoot was experiencing at the time. Drinking too much and married to another woman, he on one occasion broke Smith's cheekbone in a fight.[10] Lightfoot has stated of his three-year relationship with Smith, "I was sometimes crazy with jealousy".[11]
Bluegrass musicians Bruce and Brian Good, The Good Brothers, who were one of Lightfoot's opening acts during that time, got fired by Lightfoot for "flirting" with Smith.[12] Smith was cited in divorce papers, and shortly after his affair with Smith ended, Lightfoot was a party to the most expensive divorce settlement in Canadian history to that date.[13]
In a 1975 interview, Lightfoot expanded upon Sundown and hinted at the worry he experienced in his relationship with Smith:

"All it is, is a thought about a situation where someone is wondering what his loved one is doing at the moment. He doesn't quite know where she is. He's not ready to give up on her, either, and that's about all I got to say about that."[14]

Lightfoot gave another insight into his relationship with Smith in a 2000 interview when he remarked upon "Sundown" being:

In 2008, Lightfoot gave an interview confirming that "Sundown" was written with his then-girlfriend in mind:

After Lightfoot and The Band, around 1976 Smith became a backup singer for Hoyt Axton, who was struggling with cocaine addiction at the time.[16] She sang on his song "Fearless" (1976) and co-wrote "Flash of Fire" with Axton (1976).[17]
Smith became involved with heroin use in the late 1970s. In Bob Woodward's Wired, she appears as a drug dealer toRolling Stones band members Ron Wood and Keith Richards during their touring and rehearsals as The New Barbarians. She moved to Los Angeles and as her addiction increased she became a full-time drug dealer and courier to Wood, Richards and others in the entertainment world. Smith first met comedian John Belushi on the set of Saturday Night Live in 1976 when The Band were the musical guests.[18]
She later met Belushi again through Wood and Richards and was contacted by Belushi to purchase the drugs that eventually killed him. Smith alleges that she injected Belushi with 11 speedballs (a combination of cocaine and heroin) at theChateau Marmont in West Hollywood, California in 1982, and that this injection led to his death. According to Woodward,Robin Williams was on the scene at the time, and was "creeped out" by Smith, whom he thought to be a "lowlife".[13] Belushi had been battling cocaine addiction for years. He was not a heroin addict, though he had used the drug infrequently before his death.
Released after initial questioning on the morning of Belushi's overdose, Smith spoke briefly to freelance writer Chris Van Ness. Then, two National Enquirer reporters, Tony Brenna and Larry Haley, spoke with her and published their lengthy in-person interviews with her under the headline: "I killed John Belushi. I didn't mean to, but I am responsible." This led to the charge against Smith in Belushi's murder and 13 counts of administering cocaine and heroin.[19] The National Enquirerreporters refused to testify at the subsequent trial and were threatened with incarceration by Judge Brian Crahan; however, he later vacated the contempt order.[20]
Smith eventually returned to the United States, in June 1986 where she accepted a plea bargain by "plead[ing] guilty to involuntary manslaughter and several drug charges".[21] She served 15 months in prison at California Institution for Womenbetween December 1986 and March 1988.[21][22] She was deported to Canada after release[21] and moved to Toronto "where she worked as a legal secretary and spoke to teenagers about the dangers of drugs".[23]
Smith was arrested in July 1991 "with two grams of heroin in her purse" in Vancouver, British Columbia, for which she received a fine of CDN$2000 and "12 months' probation".[23] She appeared in the E! television network show True Hollywood Story episode on Belushi's death which first aired in 1998.[24][25][26]

Thank the Good Lord, That Gordon Lightfoot got away from her before something like this happen to him! This is not said out of cruelty but out of love for Gordon!

After 40 years I guess it safe to tell some of

my stories. I was very lucky to be pretty much in the right place at the right time to meet most of famous and infamous of my generation. A lot of people I not only met but hung out with or became friends with and have some interesting and funny tales to tell. I have a story or a personal comment on 99% of the people here and I hope to get to them all. My stories and list of my patrons as I can remember them. if you were there or have a story please send it it. Many thanks

to Gord, Greg,Laura, Glynis,Matt,Paul
Rolling Stones
I get a phone call one night. It's Tom Hedley "Hey Mick Jagger wants to talk to you. "Allo Gary Mick Jagger here. "Tony Silverthorn says "we might get a drink at your club?' A little stunned I said...
Continue >>
Murray McLauchlan Lady Luck
Lady Luck is a song by Murray McLauclan it begins. I remember shooting craps at Gary's Bar where the money disappeared on every roll. So I had a drink on someone else's paycheck and Lady Luck...
Continue >>
Handsome Ned
Feb 01, 2010
HANDSOME NED VideoTHE SECOND COMING OF THE KING OF QUEENBY MICHAEL HOLLETTHANDSOME NED HAS AN UPCOMING MOVIE, A U.S. CD RELEASE AND NEW YOUNG FANS – BUT HE WON’T BE TOURING. Handsome Ned is the...
Continue >>
Gary Kendall Writes
I`m a little foggy on the the time frame but I think your bar`s era was around 76/77. Not the best time for my career as a blues musician. Disco had taken out a number of live music clubs, punk...
Continue >>
Joni Mitchell
Bernie Fieldler brought her to the club one night and she couldn't have been nicer. She borrowed Roy's guitar and got up and sang a whole set to my patrons. what a treat. She broke 2 strings on roys...
Continue >>
Jerry Reed
Jan 27, 2010
Myrna Lorrie was a frequent visitor, She was a lot of fun and I caught a few of her shows and liked her music. She showed up on the arm of Jerry Reed one night. They had Rosanne Cash and one of the...
Continue >>
Helen Shaver
Jan 26, 2010
Helen was a night person, She was intelligent and sexy. She came to my bar often and we enjoyed each others company. She invited me for dinner one night, And in her sensuous sultry voice recited...
Continue >>
Elizabeth Ashley
Elizabeth married Jimmy McCarthy an old friend as well as a friend of Murray McLauclan. She was in Toronto quite a bit shooting films. Somehow I became her Toronto buddy and we spent some good times....
Continue >>
Michael Ironside
Mike was still at the Art college of Ontario when I met him. He somehow got into my afterhours club with somebody and soon became a regular. he was in his early twenties exhuberant, totally...
Continue >>

Danny Marks wrote...
Great late night days and that great juke box. I used to play The Virtues over and over, waiting for the guitar solo. We'd come in after our gigs, adrenaline flowing. Gar's Bar presented the...
Continue >>
Dennis wrote...
Sigh, indeed. Helen Shaver is one sexy woman. Several years ago, I met her very briefly on a tv shoot in Vancouver and her intense gaze and confident smile took my breath away. And don't even get...
Continue >>
Anonymous wrote...
Can't wait to hear about Helen.
EXSENO wrote...
You lucky thing you. I would have loved to have the inconvenience of having to put up with that.
Anonymous wrote...
I remember a night when Tom Waits played The New Yorker and because I knew Chuck Weiss, a very good friend of Tom's, he came to a party with me that Michael Burns brought Hunter Thompson to and that...
Continue >>